Microsoft announced that it would buy Yammer for $1.2 billion, after a week of speculation that the deal was imminent. From my perspective, having researched the enterprise social networking space (see report), the acquisition is a continuation of current trends in the industry and makes a lot of sense for both MSFT and Yammer.

Yammer CEO David Sacks wrote in a blog post about the acquisition, “When most people thought social networking was for kids, we had a vision for how it could change the way we work.” When Yammer launched at TechCrunch four years ago, it won the “best in show” award from judges, and it’s been on a rocket ride since then for two simple reasons — it’s free and people love using it. The result: 85% of large companies have Yammer inside their walls.

That love-driven virality is a key reason why Microsoft bought Yammer — after all, who would use the word “love” to describe Microsoft or a product like SharePoint? The fact is that Yammer and its competitors are creating new ways for work to get done, that is not only effective but also — dare we say it — makes work fun. Microsoft knew that it was behind in the enterprise social networking space and could either build organically within SharePoint or acquire. I think they did the smart move by buying Yammer, as it gives them not only the largest independent player, but also penetration into virtually every company that already is using its products.

The challenge going forward is how Microsoft will integrate Yammer into its Office offerings, SharePoint in particular. Yammer already enables integration with SharePoint by inserting microblogging capabilities right into it, making the enterprise app much more social. Up to this point, the main selling point of ESNs has been that they just had to be better than SharePoint’s built-in social tools. That is no longer the case, so you’ll see other enterprise app companies scrambling to snap up remaining players like Moxie. Here’s a graphic from my ESN report from February that shows how the world (used to) stack up in terms of players — this is a game being played by the big enterprise players now. 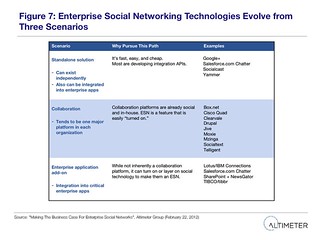 While there is concern that adding Yammer makes worse an already-confusing mix of Microsoft offerings, it’s nothing compared to the bewildering situation facing CIOs when it comes to ESN. One CIO shared with me that he faces a situation of having Salesforce’s Chatter, VMWare’s Socialcast, Yammer, and SharePoint all running within his organization. And that didn’t include rogue installations of Box and Google+.

In the end, it makes sense for each company to have one — and only one — enterprise social network in order to ensure universal access. Thus ESNs like Yammer become battlegrounds in the way that other foundational enterprise tools like email, IM, and CRM have become. In this way, Yammer makes a whole lot of sense for Microsoft, as it becomes more integrated into all of its offerings, rather than remain a standalone. Here are some examples:

Taking all of the above into consideration, the $1.2 billion price tag begins to make sense. But the intangible brand value goes back to where this blog started — the potential that we as workers and companies will again love Microsoft. Even if that translates to just a chance for a mild “like” for Microsoft products because they enable social connections, it will have been worth it for Microsoft to acquire Yammer.

11 thoughts on “Analysis: Why Buying Yammer Makes Sense for Microsoft”